No, I am not being hyperbolic.

I’v had a good amount of great food experiences over my relatively short life, both homemade and restaurant served; and visiting Washington, DC, this weekend I knew that I needed to have another one. I mean what’s a trip to the nation’s capital without a top quality meal? After doing some research I picked BRESCA for one specific item on the menu, their “Rohan Duck a La Presse,” and while I knew it would be good (I mean it better be for them to charge $118 for an “four per night” entree), I had no idea as I was rushing in the door that this would literally be the most unforgettable meal I’ve ever had.

I was seated very quickly and was almost immediately given a complimentary palate cleansing mixture of orgeat, apple juice and sherry…which was delicious. Its something that I would never have known existed but now have the urge to try making at home, not to mention that whenever an establishment can provide you with a complimentary anything, its a huge plus. Now going into this dinner, I didn’t plan on ordering any drinks, after all this was already an expensive meal and I figured that water would suit me fine instead of paying for a mixed drink; but that quickly changed when I saw “The Bee’s Knees.”

Composed of gin, mead, honey and lemon, the real draw of this tasty sounding cocktail was the fact that it came in a very unique “glass” shaped like a bee. When I asked for this drink I double checked with my server if this was indeed the drink I was thinking of and while he said that it was, unfortunately they ceased serving it in the bee because there was too much demand and not enough bees to be constantly using them. I ordered the drink anyway hiding my disappointment, that is until they placed my drink down in front of me and… 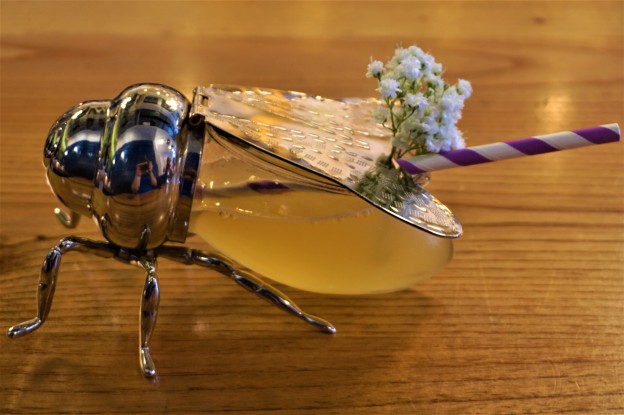 “We were able to find one for you!”

I don’t know about you dear reader, but when a restaurant goes out of its way to do something for you it has ceased doing on a regular basis, you know they are the real deal; plus look at that thing, its so cool!

But as cool as it is lets be real, I came here for the the duck, and you might think $118 is a lot of money to pay for a duck breast and accouterments, but there is a reason for it. You see this duck is dry-aged for twenty-one days and has a coriander & pink peppercorn crust with local honey. Normally when you think of dry aged meat the first thing that comes to your mind is beef, so to be able to have that experience with the steak of birds is something I could not pass up.

I knew this was going to be special when a server came out carrying the biggest duck breast I had ever seen in my life, I mean this thing was huge, I didn’t know ducks came in that size. “This is your duck,” she told me, and continued to describe how they were about to de-bone and season it and that I should soon expect one of their chefs to come out and make a sauce in front of me. It all sounded so wonderful and I don’t know what I was expecting to see but it certainly wasn’t a portable stove and giant metal press to be wheeled out to my table! Apparently no one else was either as other patrons of BRESCA stopped mid conversation to stare at the show that was being put on for me.

“This is our duck press,” said the chef, “in it we’ve put the duck legs, neck and other parts and we are going to press out all the juices, blood and marrow and incorporate it into this red wine sauce in order to enhance it.”

If I might digress for a moment, I would have been happy if all they gave me was the duck, but in true great restaurant fashion, BRESCA is going to give you all the bang for your buck they can. In addition to the duck they included three sides that could have been served as appetizers; the first was one of the most delicious salads I’ve ever had, comprised of picked cherry, kohlrabi, noisette butter and spring herbs:

Second was a fresh, warm bread that they bake daily and that (according to the chef) is “the best thing to eat with the pressed sauce,” and he wasn’t wrong. 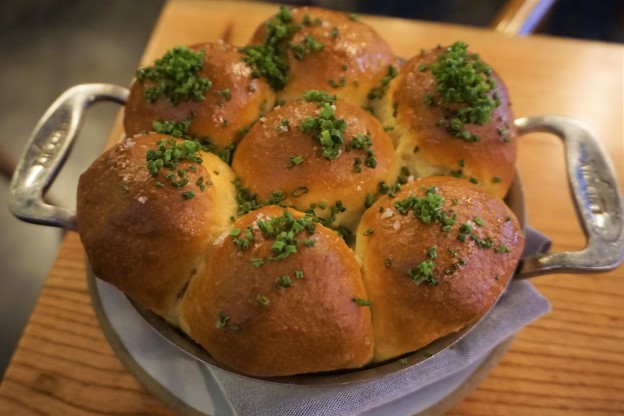 The final side was a savory duck leg tart with cherry, pistachio and spruce tip; and while I had seen it listed on the menu, it didn’t click in my mind until I bit into it that there was duck leg INSIDE THE TART! And holy cow (err, duck) it was great. 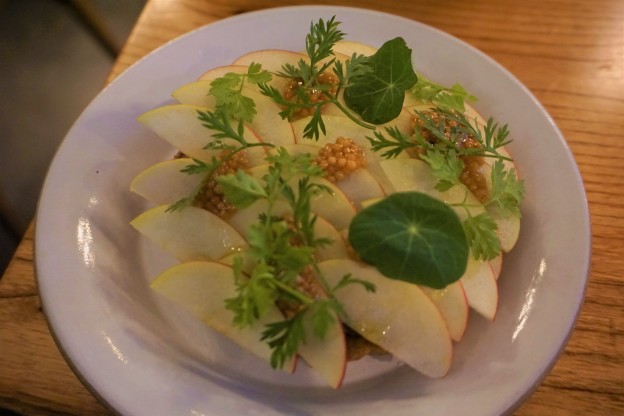 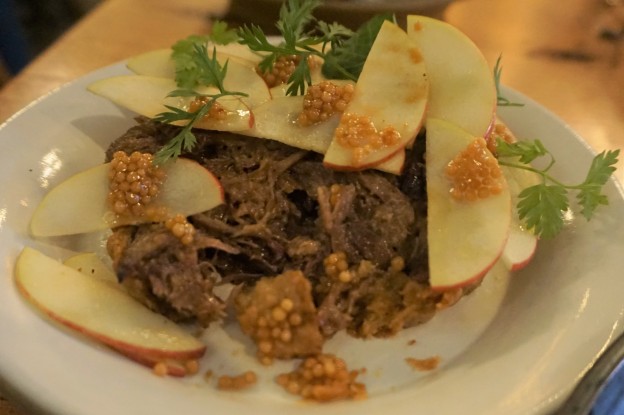 The combination of the pastry with the rich flavor of the duck meat was so good that I wasn’t sure how the the breast could be better. Spoiler alert: it totally was.

I’ll be honest, I’m not sure how to describe the flavor of this duck breast or the sauce it came in, but all I can say is son of a mother duck it was fantastic. As I ended up telling the server, I have no words.  Tender and juicy on its own, the duck enhanced red wine sauce made it all the more rich and savory…or maybe that came from the Foie Gras that I added for an extra twelve bucks…I mean, go big or go home right? Oh who am I kidding, it was probably both those things that made this an indescribably good flavor combination.  But its not enough to tell you, I just need to show you!

I was enjoying this dish so much that a woman, who I believe was the general manager, came over to me and said “You look like you want a high-five,” she was right, and we did.

That picture right there is my happy place. Its what I love most about the culinary arts; the ability to prepare something so creative and delicious is what makes places like this so special; and when you are able to do that while also making your customer feel incredibly special, you are doing nothing less than generating pure happiness, and that’s what real cooking is all about.

About three-quarters of the way through the meal I was all but full. I didn’t know how much more I could eat, not because I didn’t want to, but to be frank this is a meal that should be shared by two or more people; and if you ever make your way to BRESCA in DC, please go with friends and order this meal, I assure you it will not disappoint. But despite how full I was getting I couldn’t help but order a dessert. I did so because it was both small and incredibly special: a Foie Gras Cake Pop. WHAT? Yeah, you read that right; and though it sounds so wrong, it tasted oh so right. 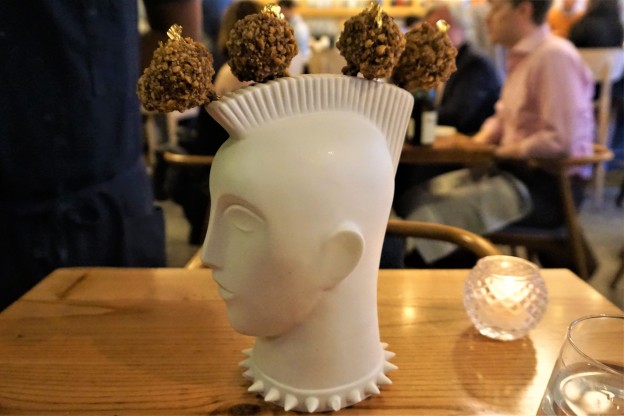 Covered in hazelnut, chocolate, amaretto and an edible gold leaf (talk about “rich”), this dessert honestly tasted like what Reese’s Peanut Butter Cup Ice Cream wishes it could taste like. Yes, I understand that it is hazelnut, not peanut, but honestly I got strong chocolate and peanut flavor vibes from the coating, and the cold duck liver inside truly gave it an ice cream-like texture and vibe. If I thought I couldn’t be any more pleased after my entree, lets just say I was very happy to be wrong. This is a desert that probably shouldn’t exist but thank goodness it does, and its something every one who claims to be even a remotely adventurous eater needs to try.

I’m not going to give BRESCA a rating for their meal or the experience, because truth be told an A+ or A++ or 5 Stars or whatever rating you could dream up…none of them can do this meal justice; but I think the one thing that can is just to say that BRESCA in Washington, DC, gave me hands down the best meal of my life, and that is really saying something. 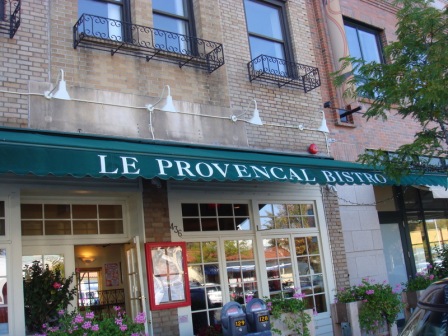 Le Provençal is a lovely little bistro located in the town of Mamaroneck, and when my friend came down and was craving some French food, this is where we decided to go.

For my meal I decided to try something I had never had before, duck, and oh boy was that a good decision because this is one of the best cooked birds I have ever had. 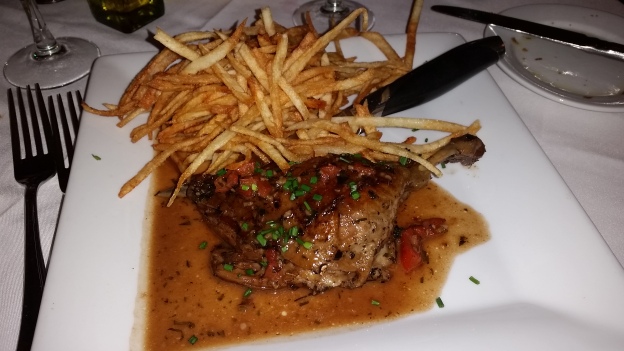 This dish is making me say something I never thought I’d say; duck is the steak of birds; and when I say that, I literally mean it reminded me of a steak.

The meat was thick, but shredded easily enough to consume quickly (unlike some steaks that require you chew for awhile), and the port wine sauce that it was bathed in was sweet and delicious. This meal simply melts in your mouth, thats how good it is. 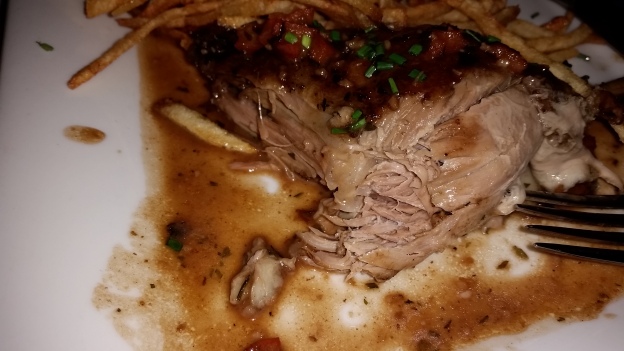 I absolutely recommend that everyone who reads this tries this dish, it is one of the best meals, let alone birds, I have ever eaten. Not to mention that for such a fancy and high quality meal, it is very reasonably priced; and their wine selection is quite good.

It is also worth mentioning that, although unrelated to the taste of the food itself, the owners and staff are very nice, knowledgeable, and helpful, making the dining experience a good one. I hope you get a chance to experience it soon.

Got food tips? Email me at: foodreviews24@gmail.com

Baseball Musings from a Lifelong Fan of the Game (and Statistics)

Commentaries on the works of Founding Father James Wilson

If I had the answers, I wouldn't still be searching

Tenderly, Too
The Art of Delish.

I'm not trained in culinary, I have never worked in a restaurant, and I haven't traveled the world. I'm just a guy who loves delicious things, and I blog to share the pure, artistic, intimate, exquisite, historical, nutritional, and culturally rich experience of FOOD.

Baseball Musings from a Lifelong Fan of the Game (and Statistics)

Commentaries on the works of Founding Father James Wilson

If I had the answers, I wouldn't still be searching

Tenderly, Too
The Art of Delish.

I'm not trained in culinary, I have never worked in a restaurant, and I haven't traveled the world. I'm just a guy who loves delicious things, and I blog to share the pure, artistic, intimate, exquisite, historical, nutritional, and culturally rich experience of FOOD.